A 50-year-old man's shock last minute confession saying he was 'guilty, guilty, guilty' in court this week to the 1988 murder of a US maths student has given police fresh hope of unlocking up to 23 'gay hate' killings.

Scott Phillip White declared his guilt in a split second decision at a pre-trial hearing, alarming his lawyers who made an unsuccessful attempt to have the plea reversed.

He now awaits sentencing for pushing 27-year-old Scott Johnson off a cliff at Manly's North Head, the brilliant PhD graduate's body found on the rocks below on December 10, 1988.

White apologised to his barrister Belinda Rigg, saying he appreciated her efforts 'but I can't handle it' and Justice Helen Wilson convicted him.

Scott Johnson had left his clothes neatly folded at the top of Blue Fish Point, and despite a bungled police finding the death was a suicide, his California-based brother Steve, never believed it and pursued the case for three decades.

Steve Johnson discovered that Blue Fish Point, like the scene of other murders in the 1970s and 1980s, was a known as a beat among Sydney's gay community.

Her surmised that that Scott 'took off his clothes, laid down, and so somebody probably walked up to Scott while he was there and proposed sex, proposed something'. 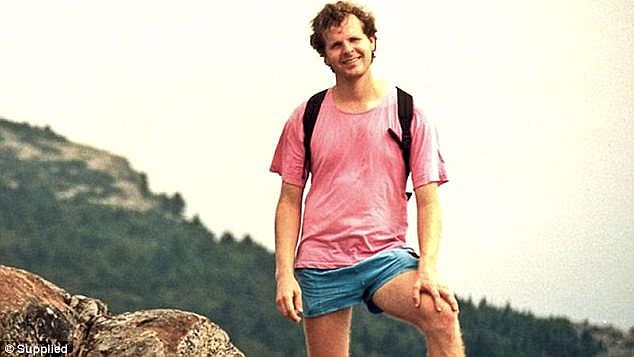 Three decades on, the murder of brilliant maths student Scott Johnson (above) has been solved after a man confessed to pushing the 27-year-old off a clifftop gay beat in 1988 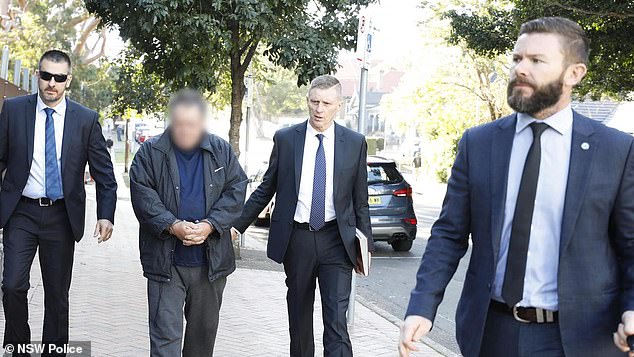 Scott Phillip White (above, handcuffed) shocked even his own lawyers in court on Monday uttering 'guilty, guilty, guilty' to Johnson's murder and apologising, saying 'I can't handle it'

It was Mr Johnson's determination that in part propelled police to re-examine Scott's death, after a third inquest into his death finding he was likely murdered and leading detectives to arrest White.

From the beginning  of the 1970s to the end of the 1980s, up to 88 gay men in Sydney's east and metro areas were documented to have disappeared in suspicious circumstances, or were the victims of murders.

Men were found slain in parks, homes or washed up on the rocks at the bottom of Sydney clifftops.

NSW Police Assistant Commissioner Tony Crandell said after White's arrest in 2020 when asked if if it gave him hope of making future arrests in similar unsolved cases,  'My word it does'.

'There are other cases that are around ... all of the beats ... that we attribute to gay hate crime have not been solved,'  he said. 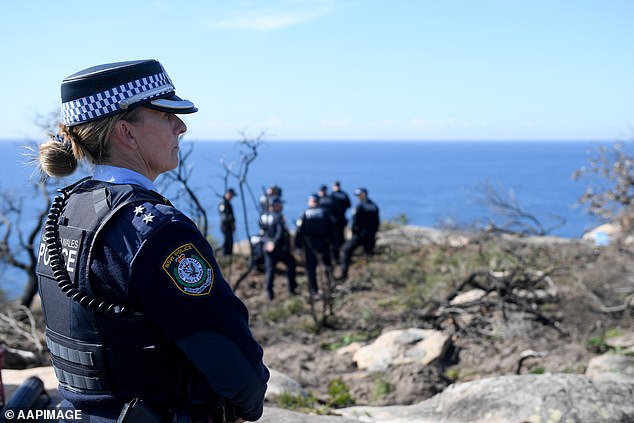 Police search North Head at Manly in 2020, where 32 years earlier Scott Johnson neatly folded his clothes and the instead of a sexual encounter was fatally pushed off the cliff 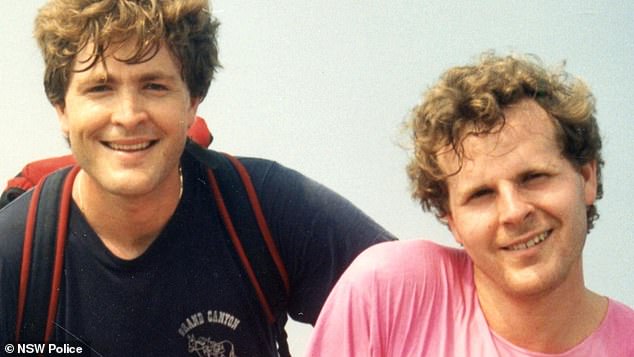 Steve Johnson (above, pictured with Scott) never believed his brother suicided and now finally has the answer after Scott Phillip White confessed to the 1988 murder

''They are not closed, they are not frozen, we will work on them and anybody out there who committed such offences should be looking over their shoulder.

'Ross Warren (and) John Russell are two cases that come to mind.'

WIN TV newsreader Ross Warren and Bondi barman John Allan Russell are believed to have been thrown off the Bondi-Tamarama clifftops in Sydney's Eastern Suburbs in 1989.

Ross Warren, 25, is believed to have died violently at the hands of one of the gangs operating in the area.

One gang was called The Bondi Boys, also known as The Part Time Killers (PTK), with up to 30 members aged 15 to 18 who hung out at night on the Bondi-Tamarama walk near Marks Park. 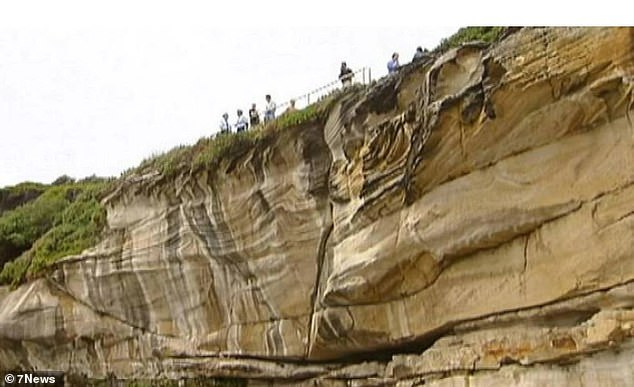 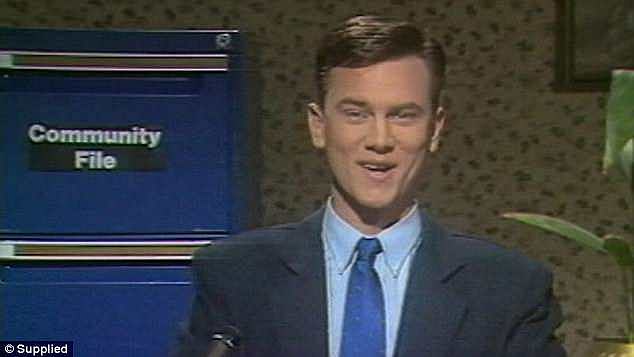 The other was loosely known as the Tamarama Gang, with three members aged 16 to 17, who met up at night on the Bondi-Tamarama walk.

Around 2.15am on Sunday, July 22, 1989, Ross Warren was seen driving his Nissan Pulsar off towards Sydney’s eastern suburbs.

The handsome newsreader was regarded as a talent at WIN Television and destined for a glittering career.

He didn’t flaunt his sexuality, and was likely headed for what he thought would be a discreet encounter, but which would go horribly wrong.

Mr Warren did not return to the friend's house in Sydney where he was staying in mid-1989, nor did he show up at WIN Television studios in Wollongong to go on air.

His body was never found, but his keys were located on the rocks below Marks Park.

On November 23, 1989, 31-year-old John Allan Russell’s body was discovered at the base of the South Bondi cliff beneath Marks Park.

It is believed he was thrown from the cliff, and rusted iron water pipes possibly used as bars to beat him with were found near his body.

Similar things were going on at the clifftops which flank the harbour, and in city parks which continued as clandestine meeting spots even after homosexuality was decriminalised in New South Wales in 1984. 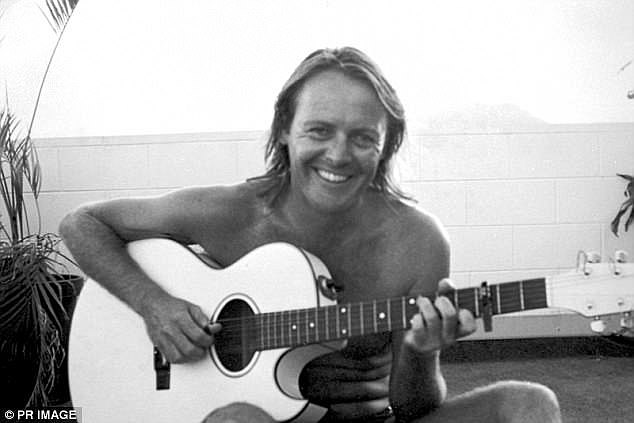 AC/DC Manager Crispin Dye (above) was brutally bashed near Oxford Street, Sydney, in December 1993 and died in hospital on Christmas Day, aged 41

In 1985, 27-year-old French national Giles Mattaini was living in Bondi.

He was last seen walking along the coastal walking track at Tamarama on September 15 that year by a neighbour; he was not reported missing until 2002.

Cyril Olsen, 64, was bashed at Rushcutters Bay in the early hours of August 22, 1992 before being pushed into the water and drowned.

In the inner-western suburb of Alexandria, a gang of up to 15 members aged between 15 and 18 years old was operating.

Known as the Alexandria Gang or Alexandria Eight, they met at their local park at night, as was the case in 1990 when a man called Richard Johnson was lured there to the toilet block by a man posing via a telephone call as person wanting to meet up for a tryst.

As Johnson parked his car and walked over to the toilet block in search of his mystery hook-up, the group of teenage boys ran towards him and knocked him to the ground with one blow.

The boys took turns punching and kicking his head and body, until he died where he lay. 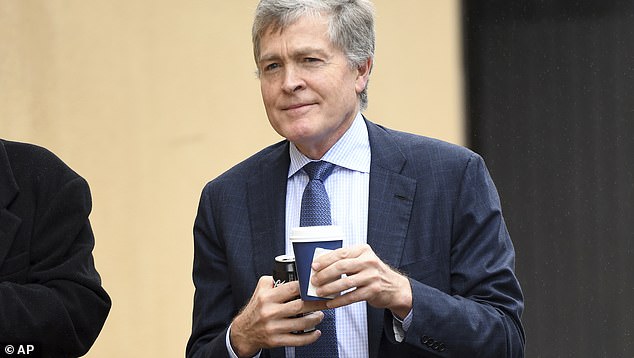 Steve Johnson, who has travelled from California to Australia over the last three decades trying to prove his brother Scott's 1988 death was murder, has finally been vindicated 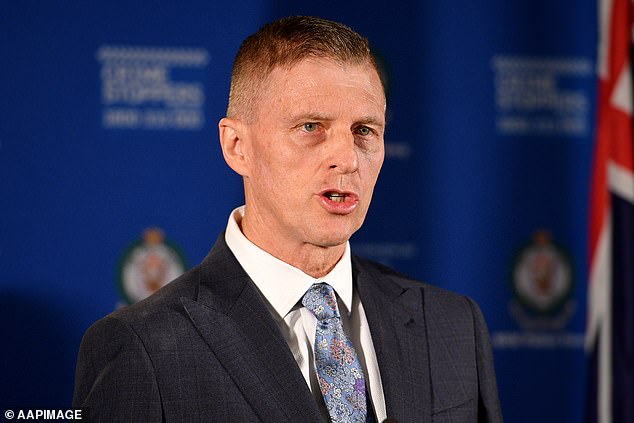 AC/DC's former manager Crispin Dye was bashed to death after drinking with friends on a night out in Darlinghurst and Surry Hills on December 23, 1993.

Witnesses reported seeing three young men standing over Mr Dye's unconscious body after he was brutally bashed before they fled the scene with his wallet.

Most of the murders became cold cases, although one, of Thai student Kritchikorn Rattanajaturathaporn, was solved.

In July, 1990, Mr Rattanajaturathaporn’s bloodied and battered body was found wedged in the rocks at the bottom of the Marks Parks sea cliff at South Bondi.

Police later determined three youths had found him and his companion, Jeffrey Sullivan, sitting on the lookout wall at nearby Mackenzie’s Point.

The youths threatened the two men, then set upon them, hitting them, kicking them and beating them with a claw hammer and a baton, leaving Mr Sullivan semiconscious.

The youths chased Mr Rattanajurathaporn along the clifftop walkway, where he either fell to his death or was pushed over.

His cause of death was either from drowning or from his injuries, which included extensive lacerations, bruising, skull and spinal fractures and brain damage. 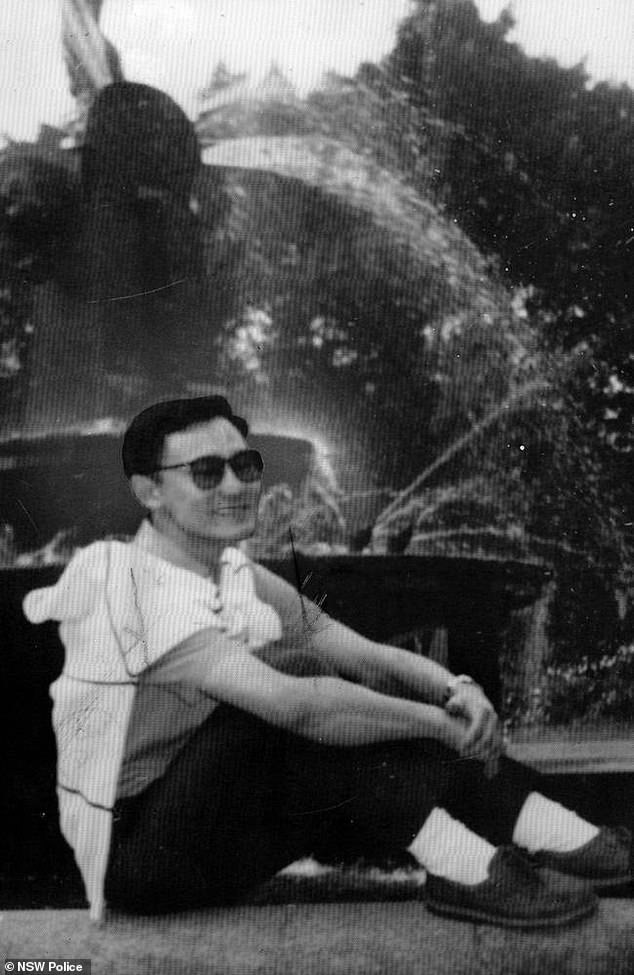 French national Giles Mattaini (left), 21, and John Russell (right), 31, were both believed to have been killed at Marks Park, a clifftop and popular gay beat between Tamarama and Bondi

Because of Mr Johnson's eye-witnessing the killing, three youths were eventually convicted of murder and each sentenced to 14 years in prison.

Strike Force Parabell was formed and in 2018 it delivered a report of its investigation into 88 gay and lesbian hate crimes, which was tabled in NSW Parliament.

The report revealed chilling details  about those carrying out the attacks - who were mainly men, but occasionally included women or teenage girls - who saw isolated and dark gay beats as the perfect place to attack.

The gangs 'would move around from beat to beat' and their motivation to attack might simply have been to obtain money.

'Predatory gangs would go up and assault victims, looking to get $10, $20 or $30 to buy some alcohol and have a good night out,' a former NSW Police detective said.

Other attackers wanted to portray themselves as 'alpha males', some simply 'hated' gays and others had been molested as children, and struggled to differentiate between paedophiles and gay men.

At the time, police often brushed off the deaths of gay men as suicides, the lack of investigation more recently described by former NSW Police Minister David Elliott as 'offensive'.

'It was offensive because of the motive behind the crime,' Mr Elliott said. 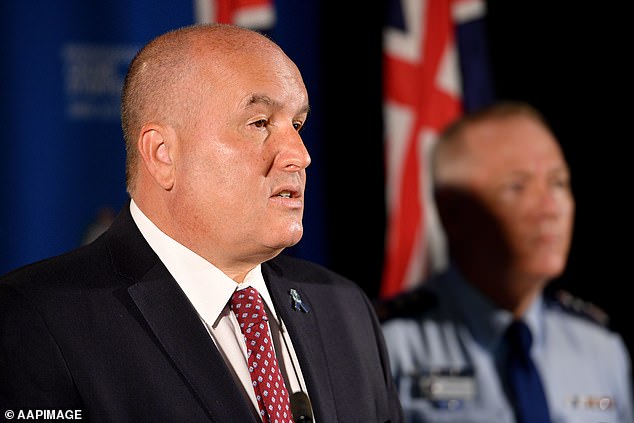 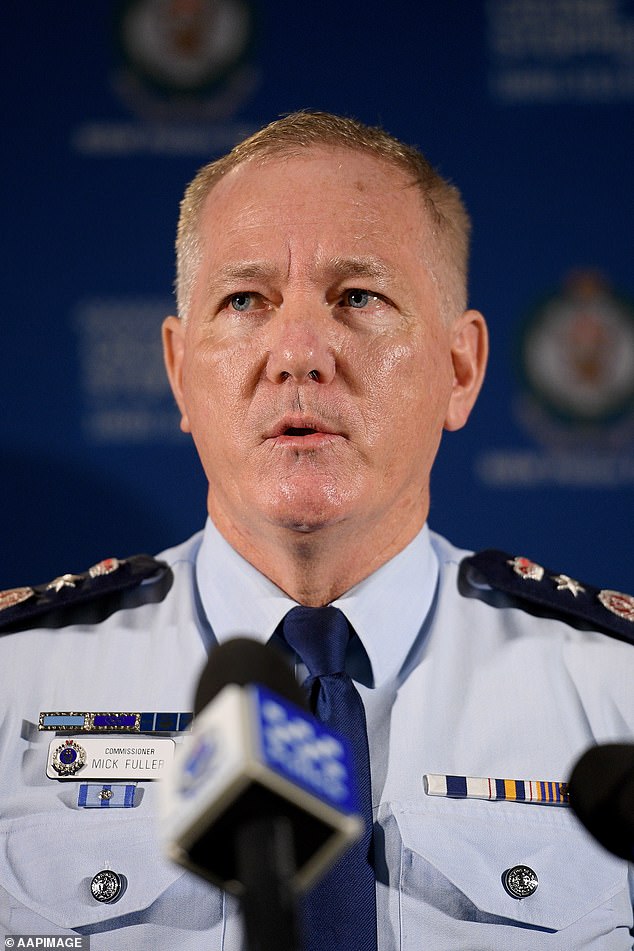 'It was offensive because it was at a time when people were slightly dismissive of hate crimes, and were too easy to try to make excuses or to move on.

'I think in any age of policing police made mistakes, but indeed there are good police throughout New South Wales' history who solved difficult crimes,' Mr Fuller said.

'I do think the plight of young gay men particularly in Sydney, but also all around the world, was a difficult one.

'Can I just impress on the community - particularly those victim's families out there - whenever we get fresh information, we will commence an investigation into their death.

'Lots of victims families are often not looking to blame anyone, they are just looking for answers.

'I think it's reasonable that we continue to do whatever we can to solve those crimes.'

- The former AC/DC manager had travelled down to Sydney from Queensland to see family for Christmas when he went out in Surry Hills and Darlinghurst.

- Around 4am on Thursday, December 23, he was kicked out of a pub for being drunk.

- Mr Dye was taken to hospital by died on Christmas Day. He was 41 years old. 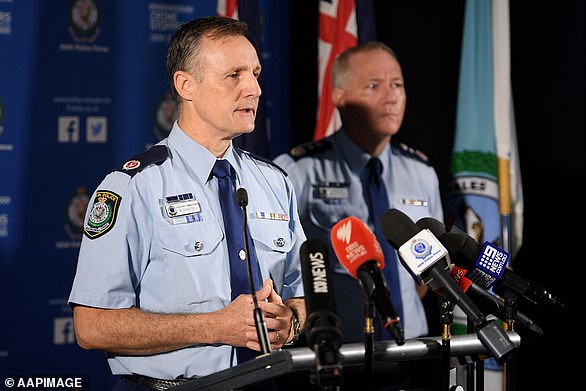 - A barman in the eastern suburbs, Mr Russell was last seen alive drinking with friends at Bondi Hotel on November 23, 1989.

- The 31-year-old's body was found the next morning at the base of cliffs near Marks park, a well known gay beat.

- He was suffering bruises and broken bones, injuries consistent with a fall.

GILES MATTAINI - Last seen walking along the same clifftops in 1985

- The French tourist was last seen walking along the coastal track from Bondi to Bronte in 1985.

- A local at Tamarama reportedly saw him during that hike on September 15, but he was never seen again.

- The 21-year-old was reported missing in 2002. A coroner found he was dead, but the details of his last moments are unknown. 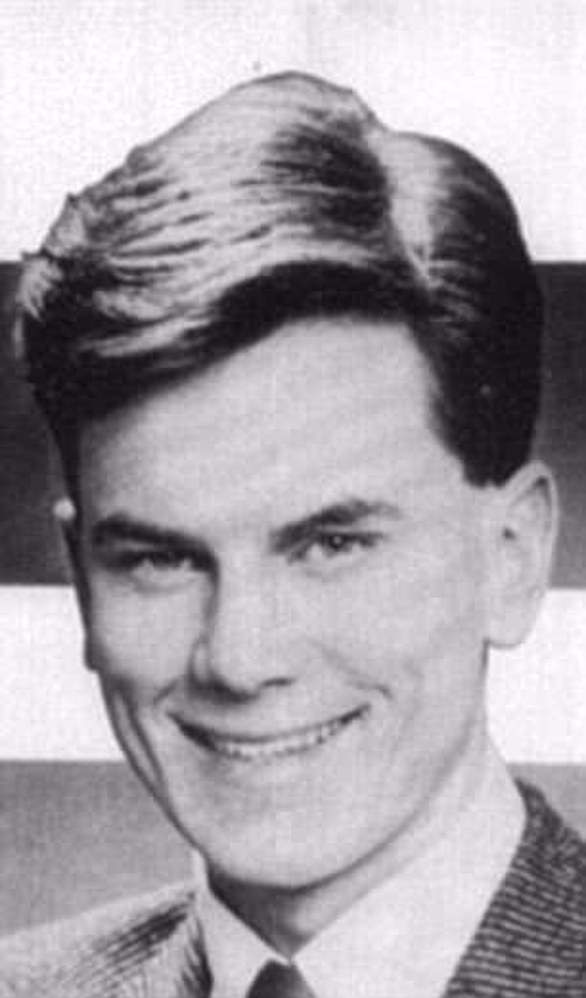 Rising star TV newsreader Ross Warren was probably pushed of a cliff at Marks Park in 1989, but his body was never found

- The 31-year-old news presenter from Wollongong ventured down to Sydney every fortnight to party at the city's gay clubs.

- He was due to visit his friend at their home but never arrived. The alarm was raised and a police search found his car keys on rocks near the park.

- Mr Warren's car was found nearby but his body was never located.

- Police suspect he was subjected to a gay bashing before he tumbled into the water and drowned.

- Before being attacked, Mr Olsen had spent the night drinking at Rex Hotel in Potts Point.

- The 61-year-old's body was found floating face down in Sydney Harbour, with injuries to his body consistent with a final struggle.

- Three suspects were identified - including a gay male prostitute - but no one has ever been charged.

RAYMOND KEAM - Bashed to death in a park in Randwick in January, 1987