Thursday, we interviewed one of the people the Biden administration charged with sedition. The man's name is Thomas Caldwell. The Justice Department claims that Caldwell was inside the Capitol building on Jan. 6. Caldwell insists emphatically that he was not. At some point, a jury will decide who is lying about that.

For now, the rest of us, though, are free to ponder. A bigger question: Is Thomas Caldwell a seditionist? Is he an enemy of this nation? On Jan. 6, was Thomas Caldwell trying to overthrow the U.S. government by force? That's a pretty hard case to make.

Caldwell's indictment paints him as a dangerous militia leader who is planning a sort of D-Day invasion on the banks of the Potomac. The real Thomas Caldwell does not fit that description. Caldwell is a senior citizen who walks with a cane. He's a devout Christian. Try to picture Thomas Caldwell leading a bloodthirsty band of insurgents. You can't, because he didn't.

Like every protester that day, Caldwell arrived at the event unarmed, and like the overwhelming majority, he committed no acts of violence. The Justice Department claims that Caldwell sought to overthrow the American system, but that is hard to believe. Caldwell, in fact, spent most of his life in honorable government service, including 20 years as a naval officer. He retired with 100 percent physical disability.

In fact, if anyone seems like a thoroughly loyal American, it's Thomas Caldwell. There's no question he likes this country much more than Susan Rice does or Tony Blinken. So why is Thomas Caldwell facing the prospect of spending the rest of his life in prison? Because, Democrats tell us, Thomas Caldwell AND co-defendants almost toppled our democracy. They came closer than anyone since Robert E. Lee. That's what they've been telling us for the last year. 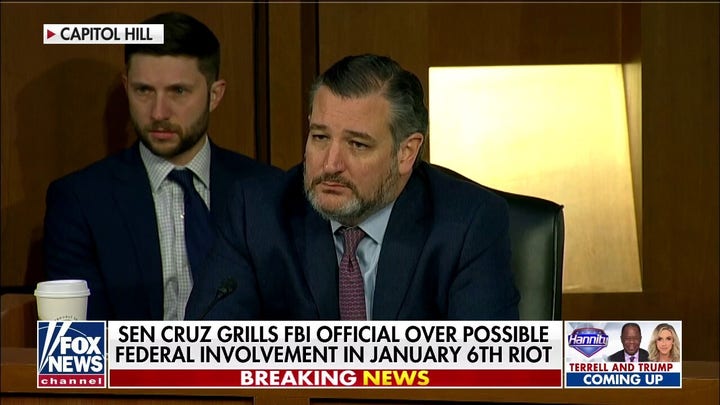 It's absurd. Only the fact we have heard it so often prevents us from recognizing how absurd it is. Nothing that happened on Jan. 6 came remotely close to threatening our constitutional order or for preventing Joe Biden from taking office. Anyone who claims otherwise is lying and should be forced to explain specifically how the mechanics of democracy were imperiled that day. But they never explained. They just yell louder and then they issue more indictments. For the record, because reality still matters, or should matter, this was the scene inside the Capitol on Jan. 6:

PROTESTER TO OTHER PROTESTERS: The police here are willing to work with us and cooperate peacefully like our First Amendment allows. Gather more Americans under the condition that they will come and gather peacefully to discuss what needs to be done to save our country.

OFFICER: We're not against … Show us no attacking, no assault. Remain calm.

PROTESTER TO OTHER PROTESTERS: We are not going to assault. We are going to be heard. Everybody, this must be peaceful.

JAKE ANGELI (CHEWBACCA GUY): This has to be peaceful. We have the right to peacefully assemble.

This must be peaceful, we have the right to peacefully assemble. Well, it turns out, no, we don't. The man who said that got more than four years behind bars. His crime: Walking into what we used to call non-ironically, the People's House. That was the QAnon Shaman. At his sentencing, he looked shocked. Most of the indicted Jan. 6 protesters have looked shocked.

If this was an insurrection, they had no idea whatsoever that they were participating in it. Business Insider reported this afternoon that on Jan. 7 of last year, the day after, protesters called Nancy Pelosi's office line in the Capitol looking for items they may have left inside the building. Law enforcement took down their numbers and later arrested them.

Is that the behavior of people who believe they were trying to overthrow the U.S. government? Obviously, it's not. These are Americans who came to their capital city with their friends to complain loudly about what politicians were doing. They assume that was still allowed, but it's not allowed. Joe Biden has made that very clear.

Blah, blah, blah, blah, blah. Read the script. Where exactly is all this criminal White supremacy, this right-wing domestic terrorism that poses, "the most lethal terrorist threat in the homeland"? Where is it? Of course, it doesn't exist. Many thousands of Americans are killed each year by violence. They're murdered. But conservatives are not the ones who are murdering them. Look it up. It's a ludicrous lie.

In fact, until yesterday, no one connected to Jan. 6 had been charged with a crime that even approached the seriousness of domestic terrorism. Democrats in Congress are starting to notice that and complain about it. So Merrick Garland caved to the political pressure and charged 11 people with seditious conspiracy. Now you'd think news organizations might have a few questions about the timing of that. This being an election year in which the Democratic Party's fortunes are heading south at high speed. 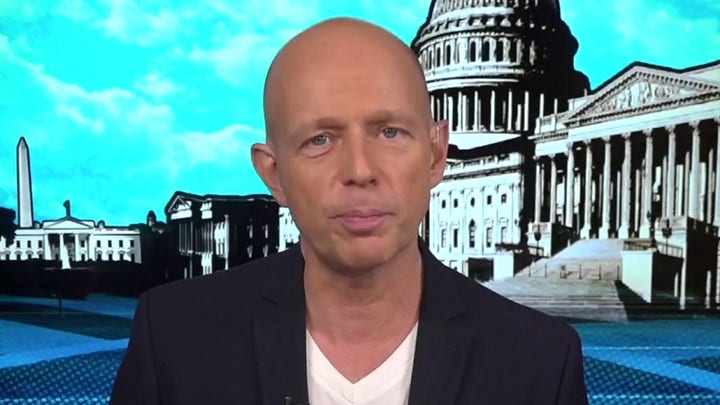 But they didn't ask questions. They just celebrated the arrests uncritically. Here's one particularly oily little Biden toadie over on CNN:

BRIANNA KEILAR: For the first time, the Justice Department is unveiling charges of seditious conspiracy against 11 participants in the Jan. 6 Capitol riot. So, what do these new charges tell us? … Prosecutors sending a clear message after criticism from lawmakers and legal experts who thought the DOJ was going too easy on the rioters.

JOHN BERMAN: The charges show the extent of advanced planning. As we learned, many of the rioters were expecting war.

Many of the rioters were expecting war. Or really, were they? Then why didn't they bring guns to the war? The indictment doesn't explain that. In fact, it tells us that as Jan. 6 approached, these dangerous conspirators who were anticipating war agreed not to bring firearms into the District of Columbia.

"You guys are going to carry?" one of them texted the others on what they thought was protected chat. "No," the other said. "OK, we aren't either."

So here you have the people the Biden administration tells us tried to overthrow the U.S. government. And yet at the very same time, this very same group also voluntarily decides to comply with Dick's famously restrictive gun laws. Uh-huh.

So if you live in D.C., you know that not everyone does that. Not even close. Washington, D.C., has an awful lot of shootings. None of them seem to interest Merrick Garland. Yet the so-called sedition is somehow decided to follow the law. Now they're facing life in prison.

It's all too ridiculous to be real, but it is real. What's going on here? Thomas Caldwell gave us this assessment last night.

THOMAS CALDWELL: Think about this if you are perceived by people who may not even be elected in our country to not think the right way or to say something in a private email conversation that they don't like, you could end up being a target just as I'm a target.

Oh, we're here to overthrow the government, we're seditionists, planning an insurrection with violence, but we better follow D.C. gun laws or else we'll get in trouble. That's literally what they're telling you. It's contemptibly absurd.

Another indicted seditionist is a woman called Jessica Watkins. Watkins entered the capital unarmed 40 minutes after the initial breach on Jan. 6. She did not commit violence. She didn't break anything or assault anyone. She didn't set a fire or spray-paint the walls. She's not from Antifa. In fact, according to her lawyer, Watkins spoke directly to Secret Service agents. She voluntarily provided her contact information, and then she turned herself in to local police when she learned there was an arrest warrant for her.

And yet, Jessica Watkins is now officially a terrorist. She and many others. So the whole point of this exercise is to redefine any opposition to the Democratic Party as domestic terrorism as they face defeat in the midterm elections, some Democrats are just saying that out loud. Here's MSNBC's Jason Johnson:

JASON JOHNSON: I'm working hard to never see a Republican Party again, because they're not a party, right? They're, Sinn Féin to the IRA. They're there, the PLO to Hamas. They're a dime storefront for a terrorist movement.

Oh, they're Sinn Féin, the PLO and Hamas. But they follow Do you see gun laws, because you can get in trouble if you don't. These people.

A front for a terrorist movement. Do they really mean what they say? Who knows if they mean it, they're acting like it. And that's the problem.

GOP SENATORS PUSH BACK AS DOJ ROLLS OUT EXPANDED DOMESTIC TERRORISM UNIT DUE TO JAN. 6 RIOT

So how did the rest of us respond as the U.S. government redefines people who disagree with their political beliefs as terrorists? Well, there's really only one way, and it's a nonviolent way. It's the essential way. Refuse to play along. Don't pretend they're sincere. They're not sincere. Tell the truth. Call authoritarianism what it is. Preferably with a middle finger extended.

That's what a man called Alex Bruesewitz did. Bruesewitz is a Republican political consultant. He dares to work for candidates who are running against members of the Jan. 6 committee. You don't want to do that.

What happened? Well, just days ago, a senior counsel on that committee demanded an interview with Bruesewitz. Here's how he responded: "I feel sorry for you that you have to deal with the likes of Liz Cheney, Adam Kinzinger, Adam Schiff and the rest of the committee members on a daily basis. I will pray for you."

In other words, up yours. Then Bruesewitz described in clear and honest terms exactly what the Democrats are so obviously doing. "This select committee has run roughshod over the First Amendment rights of my fellow citizens. Now it is targeting me." Which it absolutely is. Good for Alex Bruesewitz.

This article is adapted from Tucker Carlson's opening commentary on the January 14, 2022, edition of "Tucker Carlson Tonight."

Tucker Carlson currently serves as the host of FOX News Channel’s (FNC) Tucker Carlson Tonight (weekdays 8PM/ET). He joined the network in 2009 as a contributor.

Get the recap of top opinion commentary and original content throughout the week.